Canadian consumer price inflation shot past expectations in March, jumping to a new three-decade high and cementing expectations the Bank of Canada will continue with aggressive interest rate hikes in coming weeks.

Annual inflation rose to 6.7% last month, up from 5.7% in February, Statistics Canada reported Wednesday in Ottawa. That’s the highest since January 1991 and exceeds the median estimate of 6.1% in a Bloomberg survey of economists.

The report shows inflation pressures that are more elevated than the central bank estimated just last week, reinforcing pressure on policymakers led by Governor Tiff Macklem to withdraw stimulus from an overheating economy. Investors see strong probability of a second half-percentage point increase at its next meeting, after officials delivered a jumbo hike last week.

“Today’s surprise on inflation substantially increases the odds that we do see another 50-basis-point hike in June,” Josh Nye, an economist at Royal Bank of Canada, said in an interview on BNN Bloomberg Television. “The market was starting to lean in that direction and I think this is only going to add to that.”

Bonds were hit hard. The benchmark Canadian government two-year yield shot up to nearly 2.56% — the highest since October 2008 — from about 2.52% before the release. The 10-year yield moved above 2.8%. 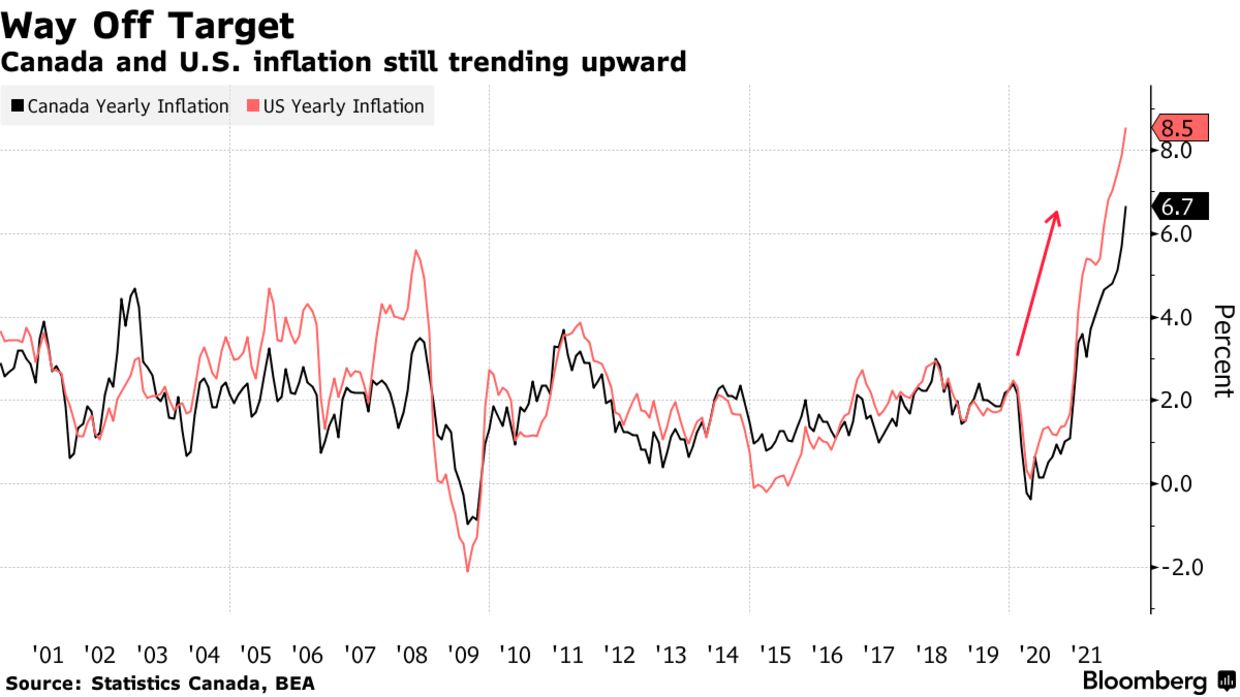 Prices rose by 1.4% in March alone, the biggest one-month increase since the country introduced a federal sales tax in 1991.

The reading may represent the peak of the run-up in annual price gains, capturing the impact of soaring food and energy costs after Russia’s invasion of Ukraine. Still, the return to anything resembling normal is expected to be prolonged and that’s a worry for policymakers trying to prevent inflation expectations from hardening at current levels.

And while gasoline prices were the biggest contributor to the monthly and annual gain in prices, inflation has become broad-based with sharp increases in costs for housing, food and cars. The average of the central bank’s core measures — often seen as a better indicator of underlying price pressures — rose to 3.77%, also the highest since 1991.

Macklem and his officials forecast inflation would slow to an average 4.5% by the fourth quarter of this year. Inflation averaged 5.8% in the first quarter, versus Bank of Canada estimates of 5.6%.

— With assistance by Erik Hertzberg